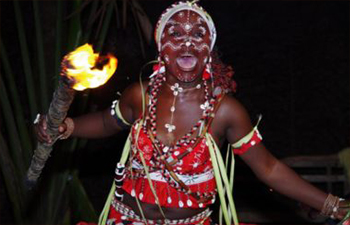 Use of Iboga for Psychedelic Healing the Bwiti Way

Iboga is one of the most popular psychedelic plant medicines in the world. It can refer to different plants in the Apocynaceae family of perennial rainforest shrubs containing psychoactive properties. They includeTabernanthe iboga, Voacanga Africana, etc. Iboga stimulates the central nervous system when taken in small doses. It can induce visions in larger doses.

The Bwiti takes smaller quantities of iboga to fight muscle exhaustion during long hunting expeditions or canoeing trips. Medium-size doses are used during healing rituals. It helps cure everything, from back pain to fever. However, huge doses of iboga are consumed during initiation ceremonies, where initiates will spend the first 2 weeks performing various rituals, gathering medicine, and undergoing confessional sessions in smoke-filled tents.

During that initiatory experience, the initiates get into another realm called the spirit world, commune with their ancestors, and receive their guidance.

Discovery of Iboga by the Bwiti

It all starts with a man who brought home a porcupine from a hunting trap. His wife prepared it for their evening meal. After eating the porcupine, the wife found herself in a shamanic journey where she discovered her origins and her true spiritual nature. After she shares her experience with her husband, they returned to the place that he laid down the trap to find out what could have caused that experience to occur. They discovered that the porcupine had been eating a root from a tree. They took it back to the village and shared it with others.

Reasons Why Westerners are Seeking Iboga

Recently, more and more Westerners have been seeking out iboga medicine, for healing, and for spiritual reasons. Part of the increase in interest stems from psychedelic tourism. Iboga contains at least 12 psychoactive substances rather than just 1 or 2… and adventurous tourists to Gabon are intrigued.

Iboga started to grow in popularity in the Western world when it was found that it is extremely effective in treating drug addiction. Since this discovery, ibogaine rehab clinics have started to pop up wherever the drug is legal, from Costa Rica to Canada.

What’s more, a traditional iboga initiation is a spiritual practice and community ritual. Not only do you have the support of your tribe as you embark on that profound healing journey, but there is also something deeply empowering about meeting your ancestors during a trip.